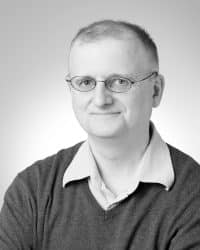 Eric Lefebvre has, since 2006, been Secretary-Treasurer of the Quebec Musicians’ Guild [local section 406 of the American Federation of Musicians (AFM)]. As a lawyer and musician, he has developed recognized legal expertise with regard to performers’ rights in Canada, in addition to acting as negotiator for Guild member musicians when negotiating their working conditions.

In the music field, Eric Lefebvre has played for some 15 years in the Metropolitan Orchestra as 3rd flute and piccolo, as well as for various chamber music ensembles and symphony orchestras in the greater Montreal region, such as the McGill Chamber Orchestra, the Montreal Philharmonic Society, the Montreal Opera and Radio-Canada. A graduate from Montreal’s Music Conservatory, Eric Lefebvre obtained a first prize for flute before undertaking choral and orchestra conducting studies with Robert Ingari, Marc David and Nurham Arman.